I know some of you from far and wide have been waiting to hear a bit of news about Scarlett’s bat mitzvah. I tantalized you by posting some pictures of our reconnaissance trip in Versailles earlier this year.

Many of you know that I pour my heart and soul into the creation of a world for my children’s parties. I have made peace with acknowledging that my parties are over the top. They are wacky and whimsical. Some people have said to me that my gift to the world is through these parties, they say it is a kind of creative worship. I prefer the less religious language. For me, these parties are connected to my very being. It comes from this deep place in my self and I offer it to my daughters, and our friends and the world. For this reason, I am happy to spend months working late in the night, after hours and early in the morning, thinking, planning and dreaming. I am happy to seek out artists, artisans, cooks, bakers, musicians, seamstresses and really an entire army of angels who form a party team.   Each time a party takes place, I feel a satisfaction that speaks to the core of who I am.

So you can imagine there were no words to describe the excitement I felt in the build up to Scarlett’s bat mitzvah. And I can’t wait to share every exquisite detail of how it all unfolded, which I will…but not today. But let me say upfront, that it didn’t quite end as I had planned, and it’s fair to say nothing ever does.

The bat mitzvah theme was Scarlett’s Versailles. One of the pinnacles of Versailles must be its possibilities for decadent desserts in keeping with infamous Marie Antoinette’s quip, “Let them eat cake”.   There is this little crepe stand in St. Germaine that I have taken my kids to since they were babies. Spread with nutella banana, these crepes are Saffron and Scarlett’s favorite food in the world.

Their coming of age needed to be celebrated ‘crepe style’. Together with an artisan friend of mine, we created a beautiful crepe bar from marron glace to nutella, flamed cherries and kiddies crepe suzette. A Versailles party would not be complete without cakes. In the centre of the cake table was a sugar paste Versailles, complete with the Hall of Mirrors, a marble staircase, copies of the gilded moldings on the wall, the famous sun clock and my favourite architectural feature, the oeil de boeuf, in its gilded glory, a wheel shaped window which is signature Louis 14th .

It gave me delight to see people marveling at the different sugar creations and talking to their friends about hidden details and new flavours. There were cakes   in a variety of hues and flavours, vanilla citrus with a blueberry cheesecake filling, pistachio cake with Madagascan vanilla, Bulgarian rose with raspberry layers. Atop all these cakes were sugar paste plaques of Scarlett’s silhouette in a Marie Antoinette spoof. 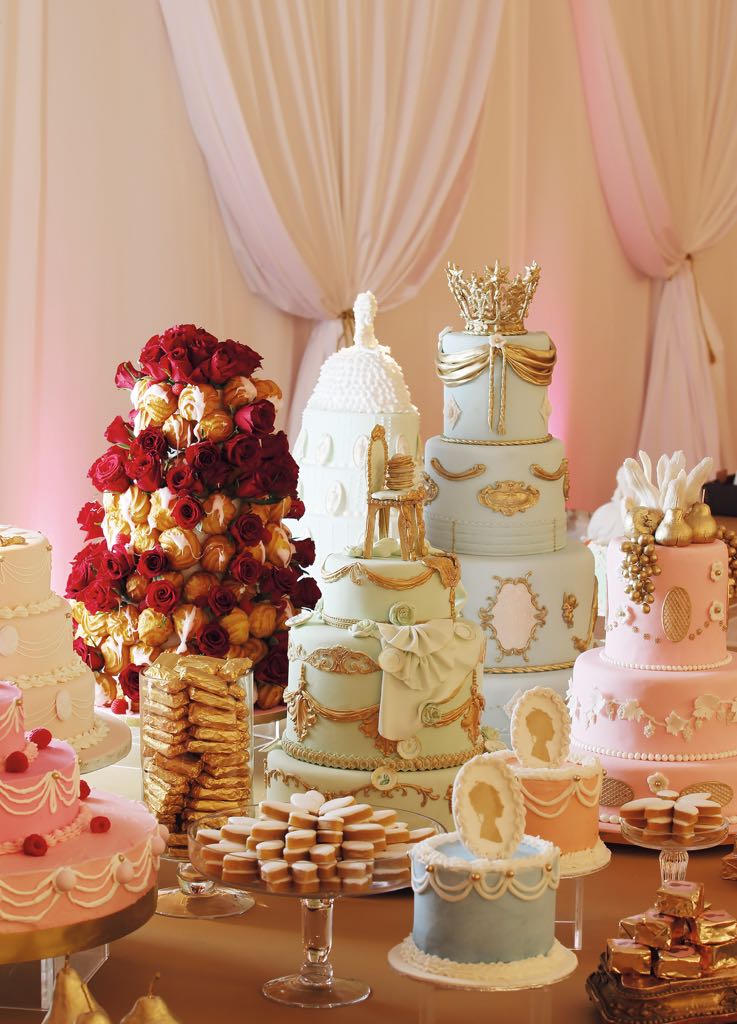 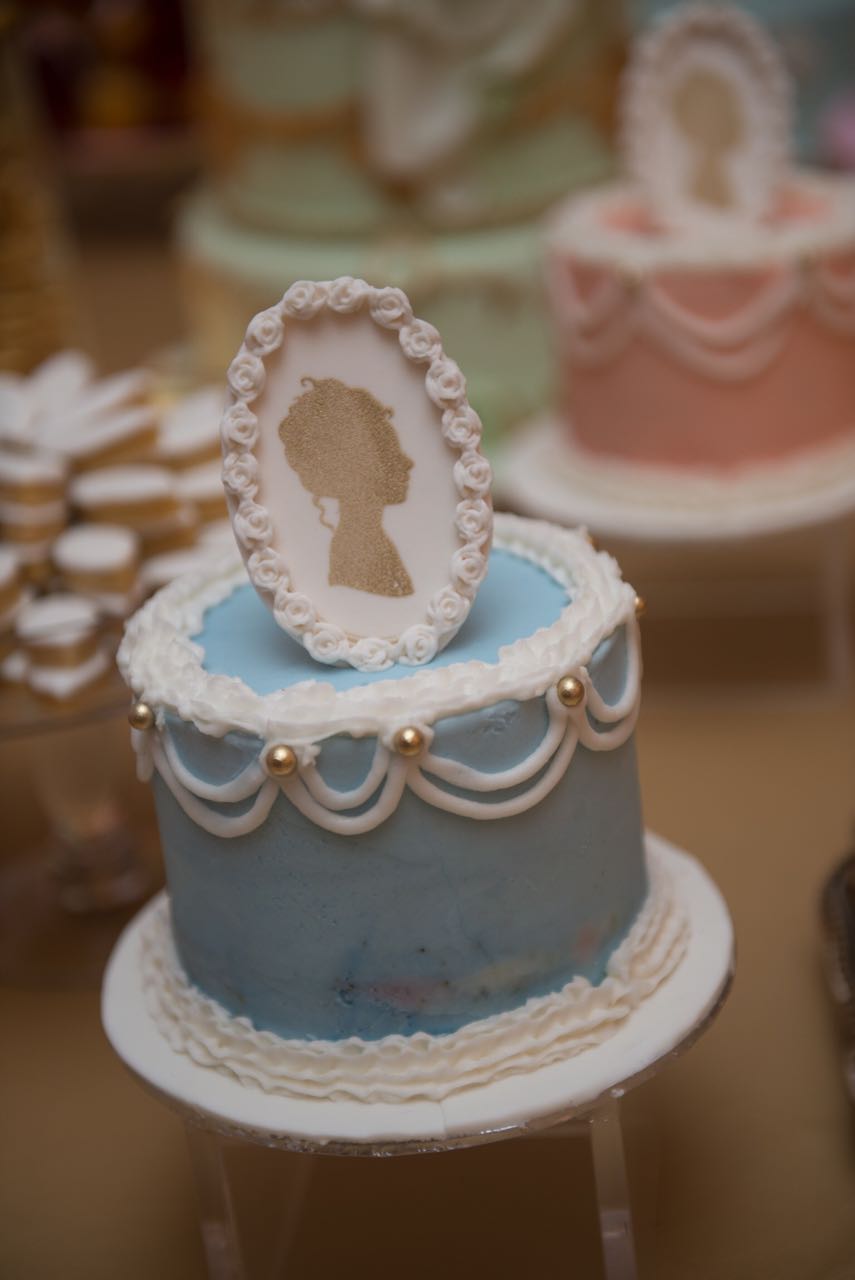 There were also homemade petit fours with these same signature silhouettes. I also put my Ritz Escoffier courses to some use as we created homemade macaroons in an array of flavours. 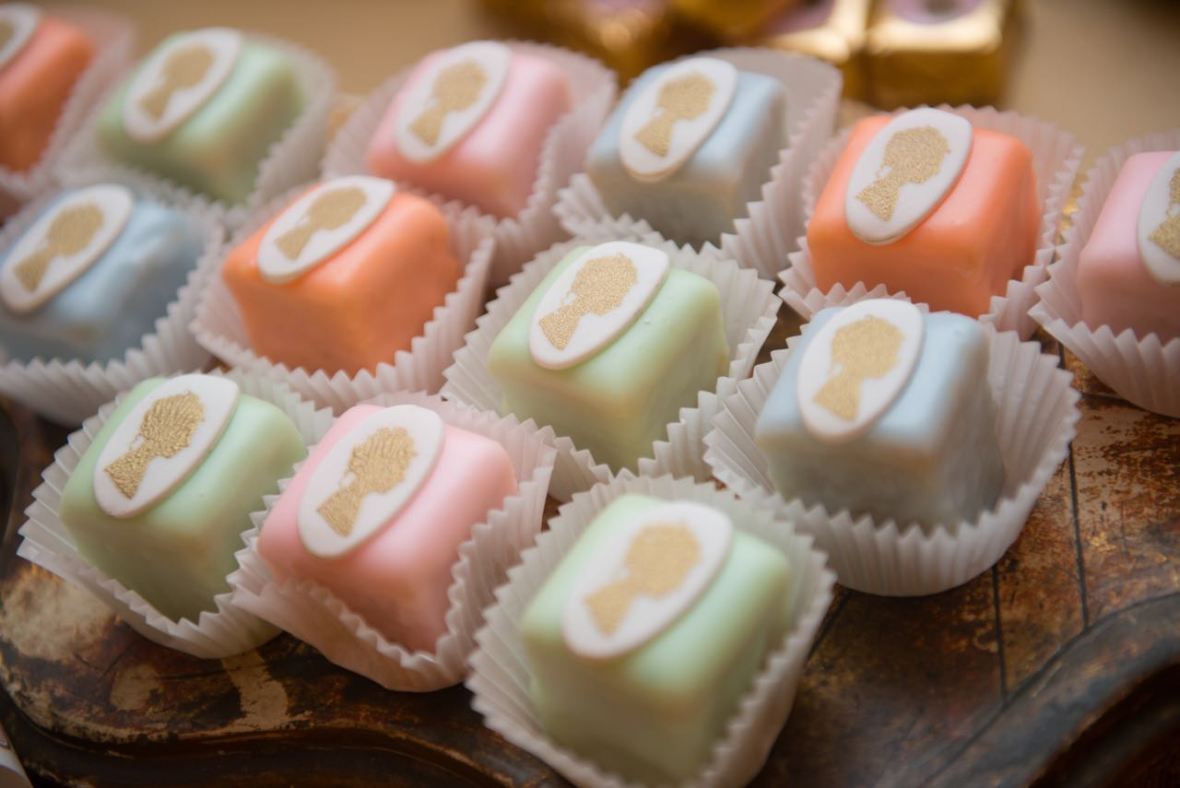 But my piece de resistance was a theatrical installation to be executed at an appointed hour as dessert was served.   As people stood around tasting and sampling, a procession of waiters styled in French long coat started to walk through the hall. The first twenty were bearing Marie Antoinette busts in white but the Madames’ hair was styled in a tall, pink and red coiffed candy floss. It was flamboyant and playful. At Scarlett’s bat mitzvah we would eat the hair of the woman who had said ‘let them eat cake’. 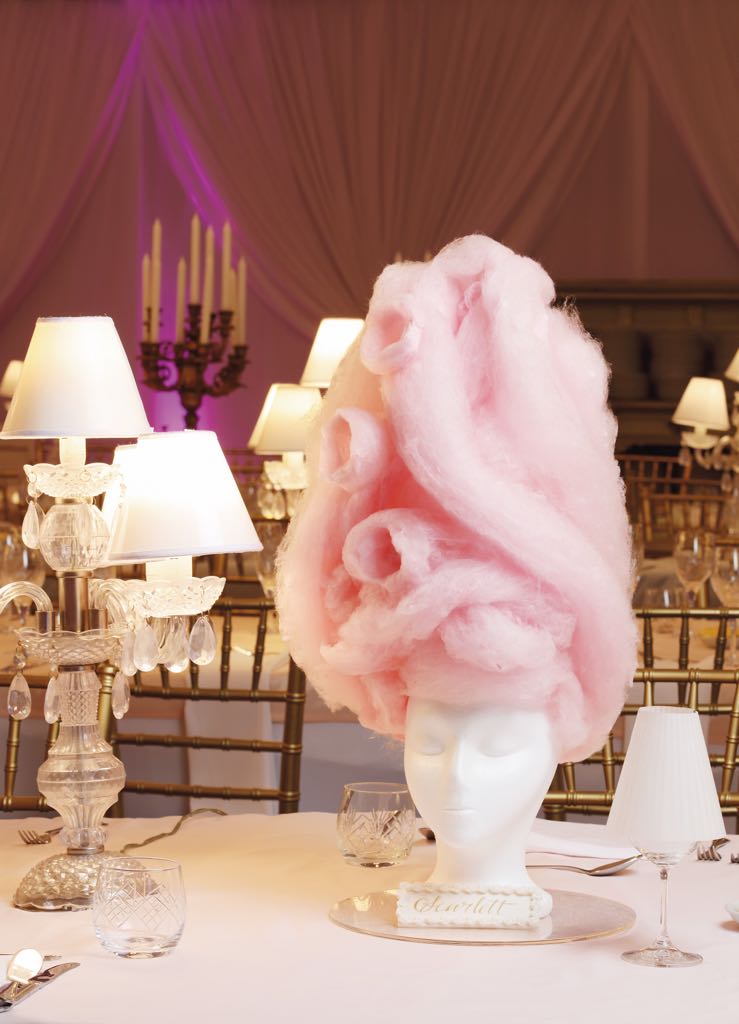 Every single action and piece of music had been envisioned for months and choreographed in the weeks preceding the bat mitzvah. I savoured every minute of preparing this installation and loved working with the waiters in the planning of the procession. The waiters walked down the aisle, placed their busts in appointed spots and then exited the hall to return down the aisles bearing candelabras in which were tall, dinner candles made of Belgian coverture chocolate. Atop of each candle was a three coloured transparent flame, each one handmade in hard candy. Friends, this was a peak moment of the party for me. To see Louis 14th French style waiters carrying cotton candy coiffs and tapered chocolate dinner candles was a dream come true. 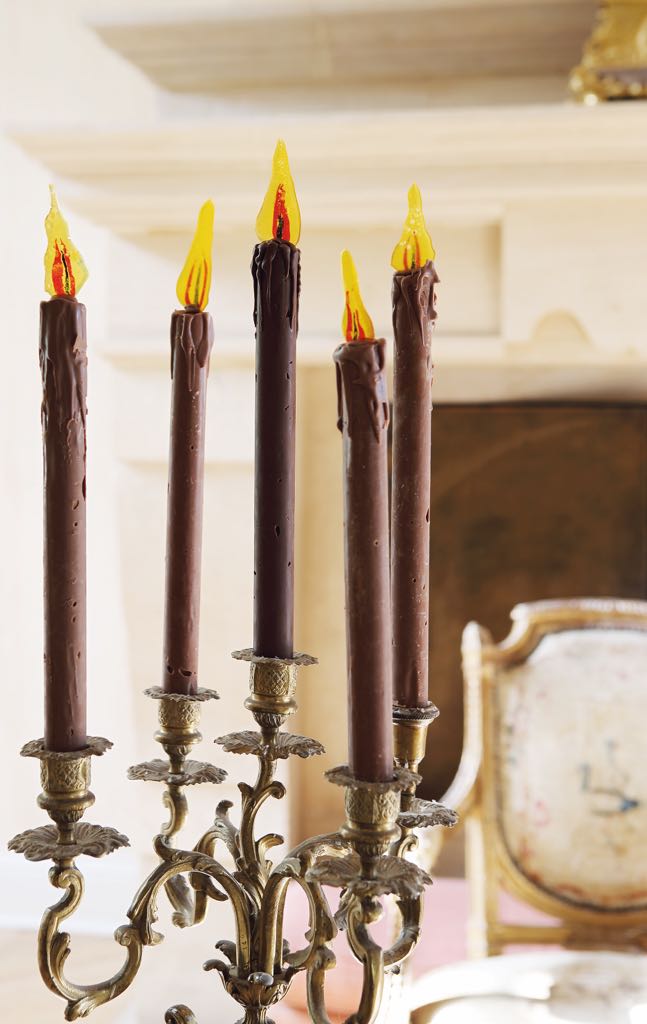 I had planned every detail of it, down the music the DJ would play at that point, a piece by seventeenth century Baroque composer,  Jean-Baptiste Lully. As each waiter walked in perfect rhythm, balance and poise, and people ogled, laughed, took pictures and stole a wisp of Marie’s sugar locks, I ran to the DJ gesticulating to raise Lully’s volume. Like a little girl, my excitement was immense. And then the utterly unexpected happened. I slipped and tripped and landed with a thud and crack on my shoulder. As it happened, I thought to my self, ‘it’s broken’. But my second thought was, ‘no one must see this’. I absolutely wanted the show to go on. I was literally seeing floaters in my eyes from the pain but I managed to peel myself off the floor. I stood  up and called my husband David. Leaning on him, I walked out the hall and went to lie on a bed. I was now the shade of Marie Antoinette before the guillotine. A few hours later, I was transported to Milpark hospital where I was x-rayed. A complete shoulder break was confirmed. I was scheduled for surgery the following day.

As I lay on my bed before the ambulance came, in a fair amount of agony, I said to my husband, ‘I have enough support here, by all means I don’t want this to ruin the party, I will be OK, the kids must have fun, the show must go on’.

But as I lay there on my bed, (I would say writhing in pain, but I wasn’t writhing because moving even one fraction of a millimeter caused immense agony),I was truly grateful for certain things: I thought to my self, at least this didn’t happen at the start of the function when Scarlett said her beautiful d’var torah and it didn’t happen during the function, when we danced, said speeches and ate dinner. I had    been so present at the party and there had been a smile on my face the entire time. And you know what, bones do mend.

I knew that my daughters Scarlett and Saffron and their friends kept dancing till later that night. I my self lay in a hospital bed re-living the images of the evening and remembering the build up and preparation for the bat mitzvah. It was a labour of immense love and it brought me such joy. I have so appreciated all the messages of love and concern. In retrospect, my friends, my response to my broken shoulder has surprised me. It is as if the labour of love and the incredible joy on the night became a wave of energy that has sustained me through this time and became its own reward that has mitigated the effects of the pain and the surgery. It’s not to say that I wouldn’t have loved that extra hour of dancing into the night, revelling with my close friends and family into the early hours of the morning. But nothing beats the gratitude of having seen this party come alive according to every dreamy detail. And every time Scarlett comes and hugs me gently and reiterates that this was the best night of her life, I surge on another wave of that energy.

I’ve promised my self a dessert party in a few weeks time. And believe me, at that party, the cry will ring loud and clear ‘Let Karen eat cake’.

2 Replies to “Dessert with a Twist”