Many years ago, way before Instagram or even email, I would consume  Architectural Design and Interior  magazines from overseas with a voraciousness. One time, I found an article in a magazine about a beautiful, eclectic, character-full  Parisian apartment.  There was an immediate knowing, there was just something about it, almost a deja vu or a sense of belonging. So taken was I with this apartment, I tore out the article and kept it close to my heart. Even when I decorated my home in Johannesburg, I  used the photographs of this space to inspire many elements of my family home.  Fast forward a couple of years. I have made friends with a woman living in Paris called Carla who happens to be an Australian photographer. We are planning a visit to Paris and she says to me she has the perfect space, owned by a friend of hers,  to use to photograph me and my girls. She is so convinced that it’s a perfect match, she says, ‘Karen you will love it’. She sends me photos of the apartment and I get cold shivers.  But of course, it is the  very apartment which I had torn out of the magazine all those years ago. It is moments like these which have made me feel that life  has a back screen, interconnections which aren’t always clear on the surface but which emerge over time. I feel God has many kitchens in store for me. The photos in this blog were all taken in this one precious kitchen in Paris  which found me a long time before I found it.

I was proud to be  a finalist in two categories this year for the South African Jewish Achiever’s Award.  The event itself is an amazing night that celebrates the talent and contributions of Jewish South Africans.  I was honoured to be among the 2019 cohort, humbled to be listed alongside the giants of our community. The morning of the event, I realised I had better prepare something to say….just in case. As I  started to reflect on the story of Ooh La La,  it came to me that my story could be told through the prism of four kitchens and a courtroom. As I wrote the speech, the chance to share my story in this way superseded, in my mind, the importance of actually winning.  I did not win that night. There was the initial sting of disappointment (especially at not being able to have my say). But very quickly, I felt comforted:  I  was a finalist and had had a wonderful evening. But more importantly, I get to go back to my amazing company Ooh La La and  to pour my heart and soul every day into making my dream a reality. I get to have my say anyway, on a slightly different platform. It’s called ‘Four Kitchens and a Courtroom’.

The first kitchen that altered the course of my life was my Bobba Ray’s. I was only ten years old when I found myself entranced as she prepared her fruit-slices from scratch, kneading the dough into a flat loaf of perfection. A hard-working immigrant from Lithuania, she ran my grandparent’s grocer’s store, cutting and preparing fish for the local Jewish community. Sitting in her kitchen, inhaling the aromas of her tzimmes, bulkas and cheesecake, I also inhaled her work ethic, her love for people and her penchant for good food, really giving herself permission to make the kitchen space her temple.

I believe that permission is something we all need in order to follow our dreams and discover our sparks of personal greatness. Sometimes we get permission from others. Mostly, we have to give it to ourselves.

Kitchen number two: When I was a law student, I moved out of home just to have a kitchen of my own. This kitchen was just one and a half metres square. When I first invited my then boyfriend, now husband, David for dinner, he came expecting tuna lasagna. Boy, was he surprised to see French bouillabaisse emerging out of that little kitchen. He says that’s why he married me. Some of the biggest dreams are nurtured through meals and conversations in the smallest of kitchens.

When we got married, we bought an original farmhouse in Abbotsford, Johannesburg. As I walked in, I saw the fireplaces and then I saw the kitchen which I knew would one day be occupied by a five metre long farm table. This home was to become the cradle of so many dreams and its heart was our kitchen – that’s number three. Friends and family have always gathered in our kitchen, and been met by the welcoming smell of food, great wine and Pavarotti. I have been loyal to this kitchen for 25 years. It is here that I taught my staff the alchemy of confectionery. This kitchen has a real soul and the more I have worked in it, made food in it, nurtured and fed people in it, it has been gracious and generous to us. Let’s be nice to our kitchens!

As I started practising as an Advocate at the Johannesburg bar, I continued to cook at home and travel abroad, finding ingredients and inspiration wherever I went. But it was in the little town of Aix en Provence where I fell in love with a confection called Calisson which challenged me to focus my wide foodie interests into a niche – artisanal French confectionery. Before I knew it, by day I was an advocate and by night I was a clandestine confectioner.

Fast forward to the courtroom: Actually, this wasn’t just any courtroom, this was the High Court of Appeal in Bloemfontein. A kind of sacred place, with plush velvet carpets, red curtains, and a hallowed silence as you entered- the place where law is actually created. I was arguing an appeal in front of 5 of South Africa’s most esteemed judges. In between the legal wranglings, I found my mind drifting to my next marshmallow flavour: Was it going to be Madagascan Vanilla Bean or Saffron and Rose Petal?? We did win the case hands-down , but in my mind the marshmallows had won their case too. I realised then that my attention could no longer be divided between Bloemfontein and boiling sugar. It was time to give Ooh La La a chance to spread its wings and fly. It was time for me to come out of the Confectionery Closet.

The fourth kitchen is the heartbeat of Ooh La La Artisan Confectionery. It’s a farm-style but professional little factory. When I go there in the morning , I am met with the heady scent of honey and roasting nuts, the musical sounds of metal beaters swirling nougat and marshmallow, the flurry of employees working their refractometers and thermometers, and a chorus of voices singing in harmony. There is something happy and magical about this kitchen – the culmination of so many dreams. It is home to 70 different products, 26 employees (most whom have been with us from the beginning), and a total of 54 gold stars from The Great Taste awards in Britain, known as the Oscars of the food industry. From watching my bobba in her kitchen to creating bouillabaisse in my little varsity kitchen, I feel I have finally given myself ​full​ permission to live my passion through the Ooh La La world. I am already dreaming of my next kitchen.

So, lets nurture big dreams in ourselves and our children. Let’s not go the safe route. You might need to travel to far distant places to find your dreams, give yourself permission to follow them and then never look back .

2.  Beat the remaining cream until stiff, then fold in the remaining condensed milk and the coffee mixture. Pour the mixture over the partially frozen first layer and return to the freezer until set.

3. To serve, remove the cake from the loaf tin – wrap a hot tea towel around the tin so it comes out easily. Sprinkle the remaining crushed pecan pebbles over the cake. 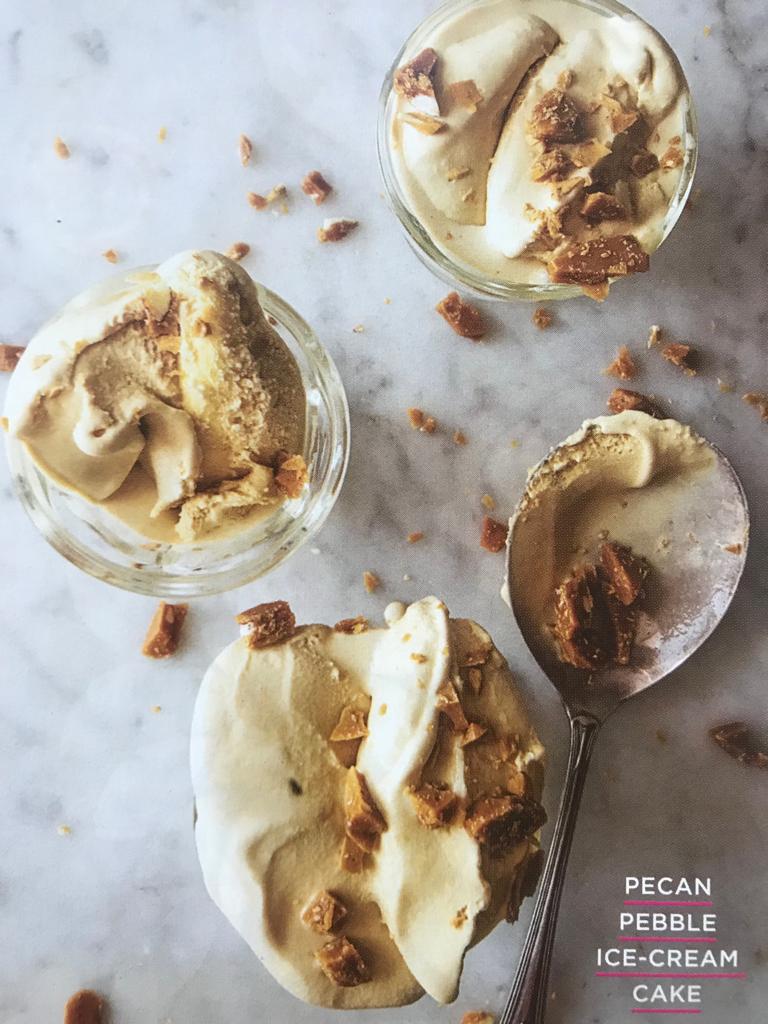